A page for members to notify of anything lost or found at the park.

Just before Christmas Pete King borrowed the “British Steam” book & 2DVD set from Ken Bye and took it home for a look. When he opened it up only the book was there, the two DVD’s were missing. Ken had no idea that they were missing so it looks like someone else borrowed them and forgot to put them in the case before returning to Ken. If anyone has seen them, borrowed them or knows where they are please return them to the clubhouse so that Pete can watch and then put the set back together. His guess is that they are lying on someone’s DVD player. Photo  below is of book and package so just need the two DVDs. 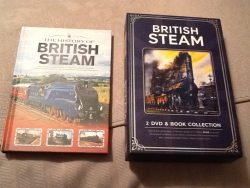