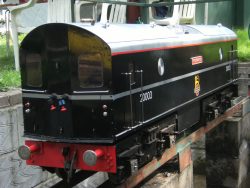 This is a replica of one of only three Class 70 electric locos (20001-20003).  The first two were built by the then SR in 1941.  This model, the third, was delayed by the war and was completed in 1948 under BR.  It is distinguished from its earlier sisters in that it has the typical Bullied 4SUB slab front, rather that the HAL style domed roof.  All three served with BR until 1968/9 when they were scrapped, none surviving into preservation.  We now only have models to remind us of this class.  More details on Wiki here and on the Southern Railway e-Group online here